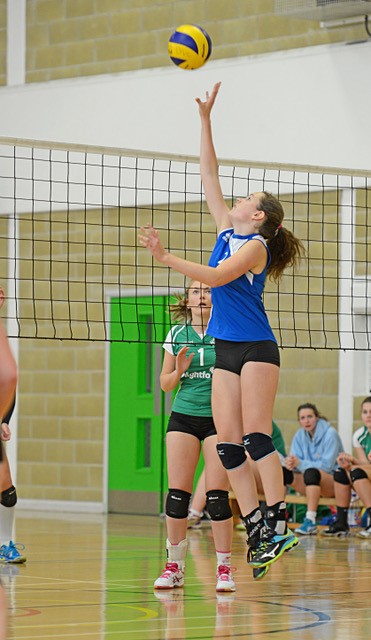 Georgia McGovern, 15, was one of ten athletes from Volleyball England who joined 125 young athletes, 125 coaches and 125 officials from 10 different sports, including British cycling, swimming, tennis, gymnastics, baseball and softball.

Georgia was chosen by the National Governing Body of Sport (youthsporttrust.org) because of talent she has shown and the commitment to develop. The aim of the camp was to increase individual aspiration and ambition, and develop empathy.

Georgia said of her experience: “I was with athletes from multiple sports all about the same age as me. We dealt with subjects such as your ‘moral compass’ and ‘marginal gain’ and how understanding and applying these could improve individual and team performances. We also studied the idea of ‘the inner chimp’ as lectured by Steve Peters who works with elite athletes to improve mental toughness.”

After Christmas Georgia attended the monthly England juniors (under 19s) volleyball training camp at the National Volleyball Centre in Kettering where she spent 6 hours a day for 3 days training on technique and team drills.

This term Georgia continues to play for Taunton in the national cup competitions and Bristol in the National League. She also will train with the South West team in preparation for the regional tournament in May as well as the regular training with the England under 19 squad. Playing in National leagues means that Georgia plays with older and experienced players form many countries like Poland and America.

Georgia got into Volleyball whilst living in California, where LA was home for 8 years, and has been playing since she was 10. Georgia also plays hockey, netball and tennis at Taunton School.