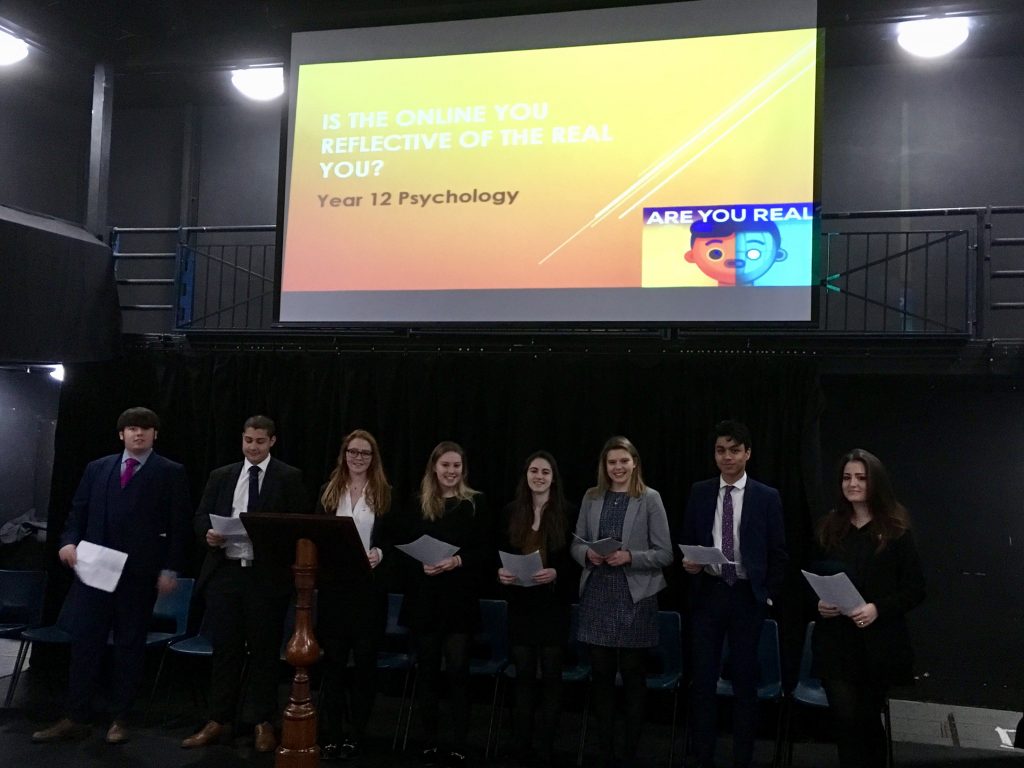 Last week Year 12 A level Psychology led an assembly regarding addiction to self image. We researched this topic following the recent children’s mental health day. Student answers from our questionnaire and results from major case studies were collated and the results were staggering. Results from the questionnaire showed that on average we take around 50-250 selfies a day, and on a global level, more selfies were taken in 2017 than ever before. Around 40% of the world’s population use social media, and around half a million tweets and snapchat photos are shared every minute. From the results we can deduce that we are spending an average of two hours everyday on social media; trawling through the endless pages which seem to capture us and draw us away from reality.

Our questionnaire depicts that 62% of us believe our selfies do not reflect our true reality. In addition, 35% stated that they would remove posts if they did not obtain enough likes, suggesting that we greatly value the opinion of others which can be to the detriment of our self esteem and mental state. Another source shows that 50% of teenagers revealed that they felt addicted to their phones and gained a sense of security from them, however some admitted that they suffered from Nomophobia which is the fear of being without our phone. This highlights that we are dependent on our phones and cannot live without them. It is estimated that 66% of us suffer from this condition.

Stacey Solomon, a television presenter highlighted the real deception of social media. She explained the dangers of airbrushing as shown by her unedited photoshoot pictures. These are paired with the altered photos which were designed to portray her in the best light. This was a protesting act informing the public of the unattainable standards young people aspire to. She stated that “children are robbed of their childhood because they’re under pressure to look a certain way.” Children can be made to feel inferior to others due to the perfection of others that they envisage. However, we must remember that not everything we see online is genuine and the reality is sometimes mystified.

The American Psychiatric Association has now stated that this addiction is classed as a mental disorder called Selfitis. It is defined as the obsessive-compulsive desire to take photos of oneself as a way to make up for the lack of self-esteem and to fill a gap in intimacy. Research has shown that addiction to taking selfies can inhibit the body’s production of the hormone melatonin, which facilitates sleep. Sleep deprivation can affect your mental state and there are links between insomnia and depression. Moreover, it can have a negative effect on relationships as communication may diminish as a result of the endless messages that are sent daily.

As we rounded off our assembly, we concluded that social media obviously plays an immense role, although it should not epitomise our life. Our overarching message is that it should be used in moderation so that our whole lives do not revolve around our phones and we can focus on reality. This in turn will have a positive effect on our wellbeing. Simple rules can be weaved into our lifestyle to decrease the hours spent glued to a screen, for example staying off social media in unconventional locations and times such as when you are eating a meal and when you are going to sleep. If we make an effort to stick to these rules, a positive outcome will undoubtedly arise.